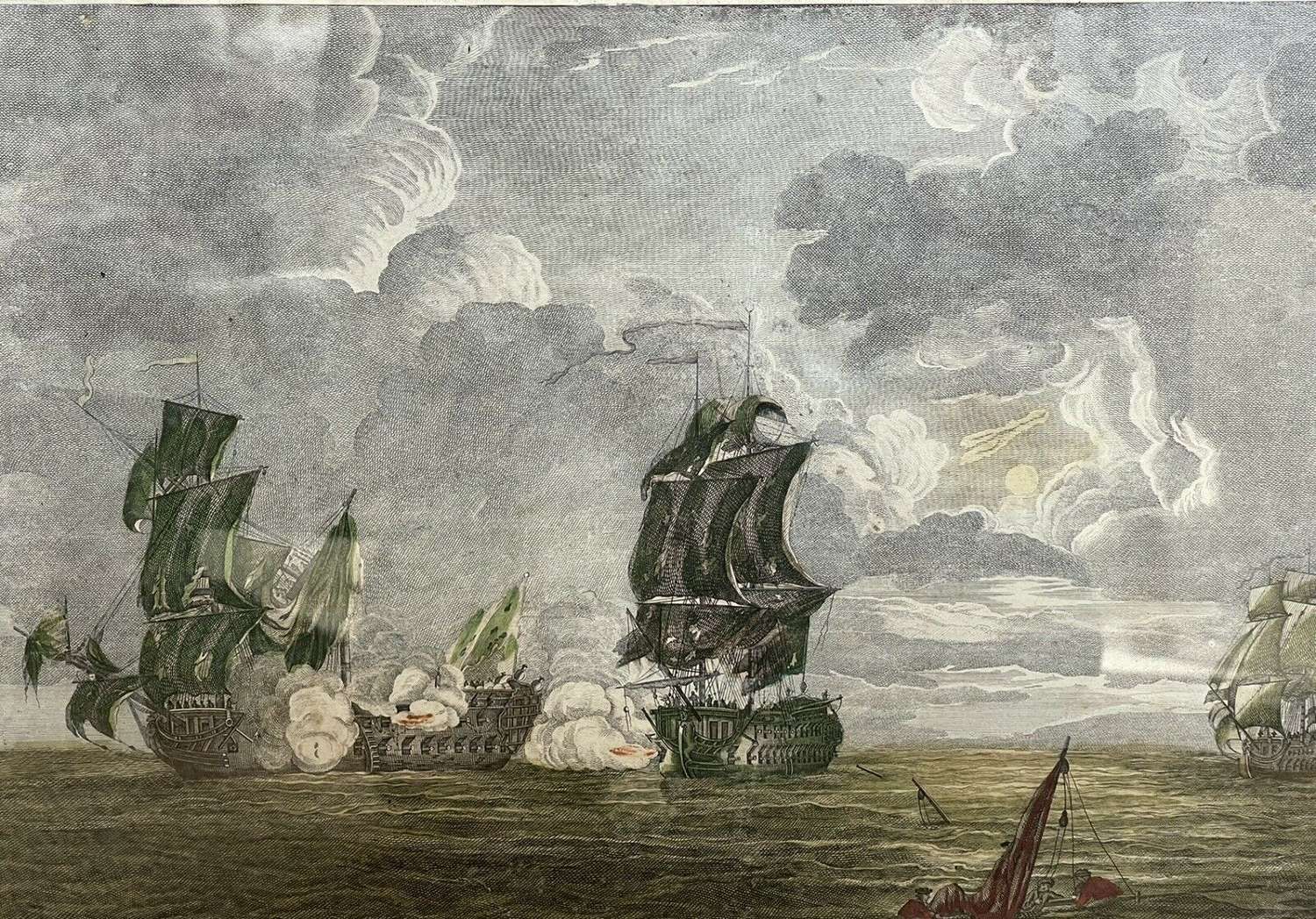 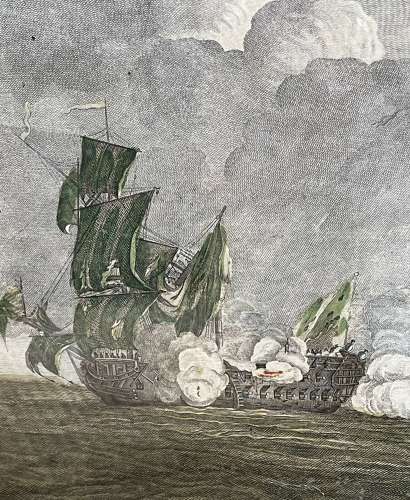 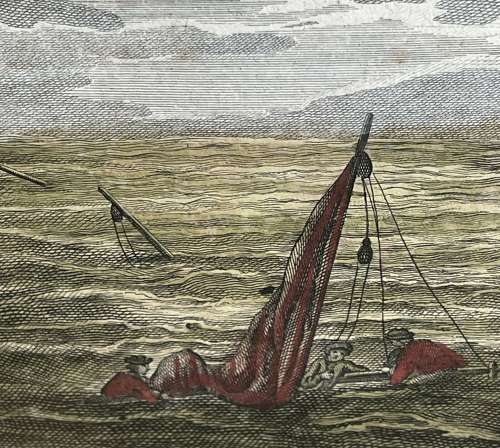 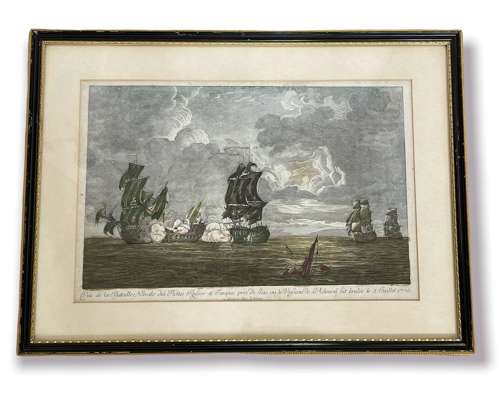 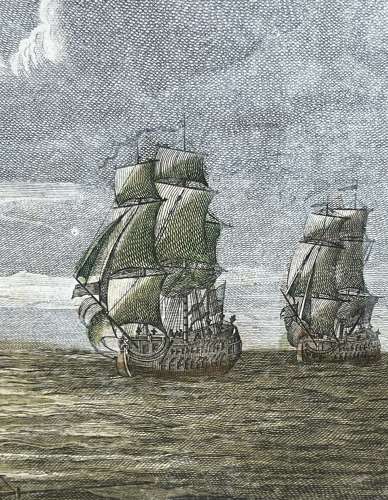 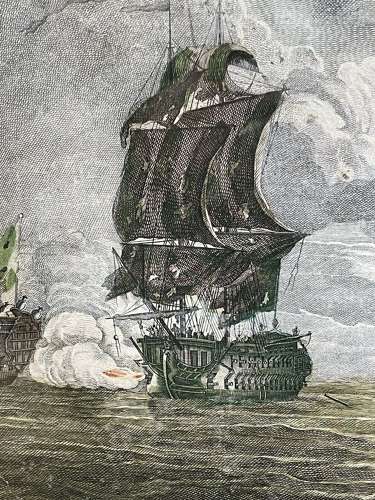 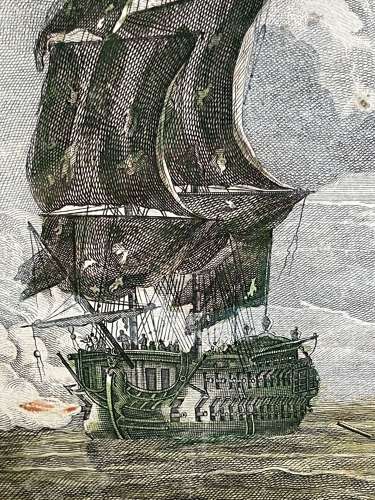 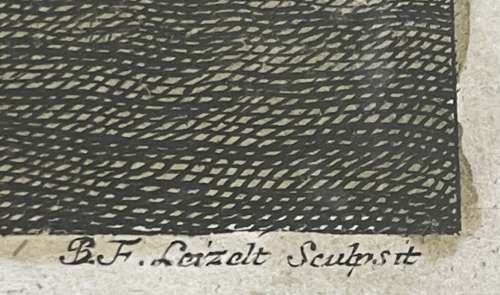 The Battle of Cartagena, 28th February 1758: Capture of the Foudroyant

The Battle of Cartagena, 28th February 1758: Capture of the Foudroyant by H.M.S. Monmouth after Francis Swaine.Original copperplate engraving circa 1770.

This is an antique copper plate engraving after the original painting by Francis Swaine in the National Collection at Greenwich. In good overall condition some foxing to the margins. Framed in a Hogarth style frame under glass. 26 cm x 40cm plate size. Full size 41cm x 55 cm .

The inscription in French below the engraving does refer to a naval battle between the Turkish and Russians on July 5th 1770 at Chesma bay. We imagine that this is an incorrect inscription.

Rear-Admiral Henry Osborn (1694-1771) was placed on the books of the Royal Navy as a Volunteer 1st Class aged just 6. He was promoted lieutenant in 1717, his first command was H.M.S. Squirrel in 1728, and he became the first Commodore-Governor of Newfoundland in 1729. A quarter of century later, in 1757, he was promoted Admiral of the Blue and appointed Commander-in-Chief, Mediterranean.

In late 1757 Osborn blockaded the neutral port of Cartagena in Spain where a French squadron with troops embarked for Louisbourg, then a French fortress on the coast of Nova Scotia, had taken refuge. The Battle of Cartagena took place when a second French squadron, of five ships, under Michel-Ange du Quesne de Menneville attempted to raise Osborn's blockade.

During the melée which ensued on the last day of February 1758, Captain Arthur Gardiner in the 64-gun H.M.S. Monmouth chased the 80-gun Foudroyant, with the Marquis du Quesne on board. Monmouth out-sailed her companions and brought Foudroyant to action in a single-ship action, Gardiner telling his people "This ship must be taken, she appears above our match, but Englishmen are not to mind that, nor will I quit her while this ship can swim, or I have a soul left alive."

At one o'clock another British ship, Swiftsure, caught up with the action and asked whether Foudroyant had struck, and when she was answered by a few shots and small arms fire, Swiftsure poured a broadside into her, whereupon Foudroyant surrendered, having lost her main and mizzen masts, and 100 killed and 90 wounded. Meanwhile Osborn had captured two other French ships in a victory which did much to restore the Royal Navy's loss of reputation after the defeat of Admiral Byng off Menorca two years earlier.

Foudroyant was taken in to the Royal Navy where she saw much distinguished service until she was broken up in 1787. The victory and the name however stuck in the Royal Navy and a battleship was to have been named Foudroyant in 1909, except that coming so soon after the 'Entente Cordiale' this was deemed impolitic and she was renamed just before launch as H.M.S. Neptune.